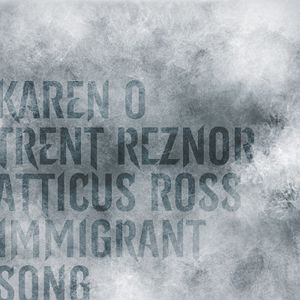 "Immigrant Song" is a song by Karen O feat Trent Reznor and Atticus Ross, and is the first track from The Girl With The Dragon Tattoo Soundtrack. It is a cover of Led Zeppelin, and was originally used in the teaser trailer for the film. It was first played in full on KROQ radio, a few hours prior to the worldwide release through an iTunes preorder of the soundtrack on December 2nd 2011.

This song is the first of two covers on the soundtrack, the other being the closing track by How To Destroy Angels, a cover of Bryan Ferry's "Is Your Love Strong Enough?".

This is the version on The Girl With The Dragon Tattoo Soundtrack. It has a more electric sound than the original, with synthesized percussion. It does, however still contain live drums and electric guitar. A dark drone fades in the beginning, then drums enter. Karen O's vocals are accompanied by additional synth layers throughout. The layers build up as the song progresses, until they cut out at the end.

This is the version released to radio stations. It features a slightly longer outro than the album version.

This version is cut shorter than the released version, and the cut off is edited slightly to fit the trailer.

A promotional video was released for this song, directed by David Fincher using the opening titles of the film. It was released on Pitchfork on December 10th 2011. The video is a collage of images, moving to pace with the music, and closes with the words "coming soon".