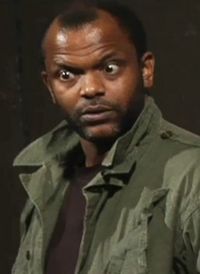 Neil Czerno was a nonviolent activist, founded Open Source Resistance, and an important person in the world of Year Zero. It is also likely he was the leader of Art Is Resistance. Neil is portrayed by Emmy award winning actor Monti Sharp.

Troubled by some "scary shit on the web," Neil founded Open Source Resistance. The website went live in March of -15 BA and he asked people to submit artwork to the website so they could be rebroadcasted in a number of ways. He organized murals in London and Los Angeles, and was interested in getting messages out on multiple platforms.

The 2/22 attacks on Los Angeles changed the perceptions that Americans had on subversive art. Terrorists had been using graffiti tagger Waylon Quine to collect photos of their targets (with their infamous list of ‘challenge tags’ texted to his cell phone). When this was discovered, people began to believe that the methods OSR employed were no longer harmless, and OSR must be stopped. Neil was ordered to take down opensourseresistance.net; he refused, and was arrested and jailed for two years.

After Neil was released, he picked up right where he left off. He was involved with underground music, produced podcasts, shot guerrilla video, and published websites accusing the government of censorship and authoritarianism. In –8 BA he was caught slipping a subversive video into a news broadcast.

After the video incident, Czerno fled to Europe, where his actions were celebrated at first. However, his support dwindled as people began to accept the tyranny they were once trying to prevent. Eventually he was denied work permits, and his wife contracted ovarian cancer. When he attempted to access public health care, he was turned away. The United States attempted to plea-bargain with him, but he refused, even though it would have saved his wife's life.

French authorities seized Czerno's daughter, and required that he surrender his visa. He was extradited back to the United States on Jan 15, 0000. On Feb 4, 0000 he was executed.

The Price of Treason

Another Version of the Truth - AIR Artist Missing thread *possible