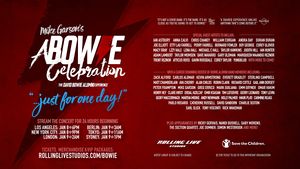 Trent Reznor, Atticus Ross, and Mariqueen Maandig appeared as part of Mike Garson's A Bowie Celebration: Just For One Day! on January 9, 2021. They performed covers of David Bowie's "Fantastic Voyage" and "Fashion", accompanied by Garson and others. The show, which included a host of other artists, was broadcast during a paid livestream and had no audience due to COVID-19. Reznor, Ross, and Maandig appeared remotely on screen while Garson appeared in Rolling Live Studios. The concert was originally scheduled for the day before, but got delayed.