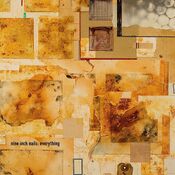 "Everything" is the seventh track on the 2013 release Hesitation Marks. On August 19, 2013, the track officially premiered via an NPR blog.[1] "Everything", along with "Satellite", were both originally written and recorded for a forthcoming greatest hits package for Interscope Records, but instead provided inspiration towards a new album.[2]