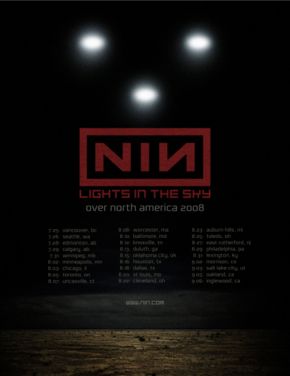 Lots going on in the world of nine inch nails...
Confirming a very poorly kept secret, the band has been reformed (details coming!) and we are about to embark on an extensive tour. The first wave of dates I can mention at this time appear below. Many more to come!
See you soon.

I am proud to announce the final personnel lineup of nine inch nails for the foreseeable future. We've added, we've subtracted and we've wound up with unquestionably the strongest lineup I've EVER had. Joining me onstage will be Robin Finck, Alessandro Cortini, Josh Freese and Justin Meldal-Johnson.
We've been working on something really special for these shows and so far I couldn't be happier with the results. We'll be revealing some live performances shortly here on nin.com - in the meantime, we've posted some photos from rehearsals up on Flickr here.
Meanwhile, I assume some of you may not be entirely familiar with the acts I've chosen to join us on various legs of this tour, so we've compiled a sampler EP for you. CLICK HERE to download this for free. If you like what you hear, be sure to show up early to the show (and please remember to support them by purchasing their music, if so inclined).
Best,
TR

Nasty Little Man, NIN's Public-relations firm, has confirmed that the Lights In The Sky Tour will be a world tour. Currently only North American and South American dates have been announced.