Difference between revisions of "Tapeworm" 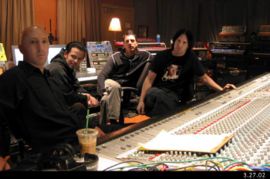 Tapeworm is a defunct side project of Nine Inch Nails which existed, featuring various contributors, since the mid-1990s. No recordings were ever released, but the group was frequently referenced in interviews. After many years of rumors, Trent Reznor announced the end of the project in 2004.

After The Downward Spiral tours in 1996, Danny Lohner and Charlie Clouser approached Trent with music ideas that Trent felt did not fit in with his vision of the band, but instead agreed to collaborate and work on the material as a side project, with each member having equal say in decisions. The band eventually became a supergroup of sorts including, among others, Maynard James Keenan (Tool, A Perfect Circle), Page Hamilton (Helmet), and Phil Anselmo (Pantera).

By 2001, producer Alan Moulder had tracked "more than an album's worth" of demos, according to Reznor's post on the site, adding that the rough songs are "very unlike The Fragile, and may not even be released as NIN material,". However after 2002, Clouser left NIN and was no longer a part of Tapeworm. The group (at the time consisting of Reznor, Lohner, Keenan and Atticus Ross) booked time in a recording studio in an attempt to produce an album. An official Tapeworm website (Tapeworm.net, now offline) was created and showed pictures from various recording sessions.

In September 2003, Lohner told Kerrang! magazine that the album was "ready to mix" but had been held up by legal issues stemming from conflicts between Reznor and Keenan's record labels. [1]

Over time, the band began to break down, partly due to label issues and partly due to Trent's lack of interest in the project and announced the band was dead in 2004.

Musicians cited to have recorded material for Tapeworm:

Relationship to Puscifer and A Perfect Circle

Only one Tapeworm song was ever released to the public, "Vacant", which was performed live by A Perfect Circle on several occasions and eventually became "Passive" on their last full length release eMOTIVE. The band's live performance of the track before it's release has also been attributed to the demise of Tapeworm. It has also been rumored that the tracks released by Maynard's Puscifer side-project are actually renamed and reworked versions of the original Tapeworm tracks. However, Lohner has stated that he used Tapeworm material as Renholder when he did the soundtrack to the motion picture Underworld.