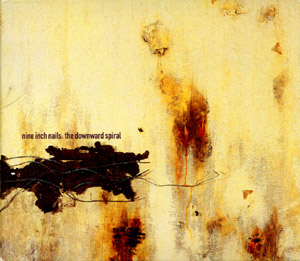 "I was really into electronic music at the time. "David Bowie's 'Low' was probably the single greatest influence on 'The Downward Spiral' for me. I got into Bowie in the 'Scary Monsters' era, then I picked up 'Low' and instantly fell for it. I related to it on a song-writing level, a mood level, and on a song-structure level...I like working within the framework of accessibility, and songs of course, but I also like things that are more experimental and instrumental, maybe."[3]

Reznor set out to make an album that was a departure from the Broken EP ("when I went into the studio, I knew that I didn't want to make Broken again"), which he described as "a real hard-sounding record that was just one big blast of anger." Instead, Reznor wanted to create an album "that went in 10 different directions, but that was all united somehow." Reznor brought in a number of guest performers to record, including Stephen Perkins and Adrian Belew. Perkins played a number of drum parts that were recorded live in the studio; these tracks were then turned into sample loops. Reznor took a similar approach to recording guitar parts. Reznor would record 20 to 25-minute long sessions of himself playing guitar on a hard disc recorder with a Studio Vision sequencer, then would cut out parts of the recording he found interesting for later use. Reznor said, "99 percent of the stuff we do–even vocals–is recorded into the computer [hard disk] first. We get an arrangement together and then dump it to tape." For "Mr. Self Destruct" Reznor ran the entire mix through the mike preamps of several modules plundered from an old Neve board.

"...it was during that tour (Self Destruct) that problems started to arise. Prior to that I would have considered myself pretty normal. With the Downward Spiral, I can remember where I was in my head, what I was thinking, and I can remember writing that record, and the mindset. This record that was about an extension of me, became the truth fulfilling itself."

Universal chose, without consulting Trent Reznor, to re-release the vinyl edition of The Downward Spiral. Trent's opinion on this was posted on nin.com:

All of these songs have been played live with the exception of the instrumental "A Warm Place". Obviously, they were featured during the Self Destruct Tours, though "Heresy" was played only once in 1994 and disappeared from live shows until 2007.