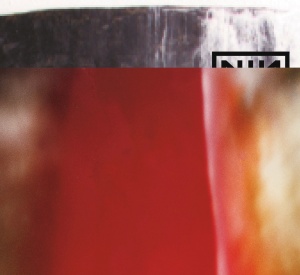 The Fragile (also known as Halo 14), released on September 21, 1999, is the fourth studio album by Nine Inch Nails.

The album features a rich array of electronic beats, ambient noise, and heavy guitar. While it received critical acclaim from many, it did not receive the commercial success that its predecessor, The Downward Spiral, did (attributed variously to the difference in musical climate, and insufficient promotion by Interscope Records).

Prior to its release, the single "The Day The World Went Away" came out on July 20; following The Fragile, "We're In This Together" was released in three parts on December 14. A collection featuring several remixes and new material from The Fragile was released as Things Falling Apart on November 21, 2000.

The Fragility 2.0 tour was filmed and released as "And All That Could Have Been" on 2-disc DVD (both Dolby Digital and DTS versions) and double VHS on January 22, 2002. It was also released as a live CD, eventually combined with a second disc of re-constructed material and new songs called Still.

In a Question and Answer session with NIN fans, Reznor hinted at the reissue of The Fragile for early 2010, a statement repeated via the official twitter account, calling it an "Ultimate reissue."

Rob Sheridan has since mentioned that the project is delayed due to packaging decisions, and as yet there is no new reissue date.

Alan Moulder is working on a 5.1 surround sound mix for the re-issue[1].

Differences to the CD version

Many of the tracks on the vinyl release differ from the CD equivalent:

The tracklist for the double cassette releases of The Fragile follow the CD tracklist, save for the insertion of "Appendage" onto the end of "Please" on US copies. The first tape splits between "Just Like You Imagined" and "Even Deeper," while the second tape splits between "Starfuckers, Inc." and "Complication."

Alternate tracklists for The Fragile from the Fragility Tour Book

Prior to Bob Ezrin's treatment, the tracklist of The Fragile went through several transformations. Two of them were revealed within a photo from the Fragility Tour Book:

Alternate tracklist for The Fragile from the Fragility Tour Book

Another image of a CD-R cover tracklist was included in the Fragility Tour Book:

Note that whilst "Anomaly" has been confirmed to be the working title of "The Way Out Is Through", the final titles for "Rotation" and "Stained" have not been revealed; "Underneath It All" may be the final title for the latter, based on its prominent lyrical use of the word. 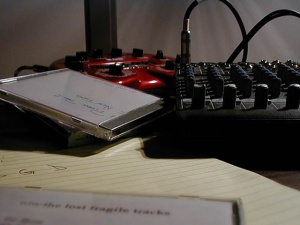 A photo uploaded to nin.com during The Fragile era hinted at a collection of unused songs called "The Lost Fragile Tracks". No other information was given besides this title for the in-studio CD-R.

Trent Reznor on The Fragile

Reznor described The Fragile in a 1999 interview:

"There's a general theme to the album of systems failing and things sort of falling apart. In keeping with the idea of making everything sound a little broken, I chose stringed instruments because they're imperfect by nature. Although it may not sound like it, most of the album is actually guitar - and that includes the orchestral sounds and weird melodic lines. When it came to instruments that I didn't really know how to play - like the ukulele or the slide guitar - we were able to get some really interesting sounds by making the studio the main instrument".

In terms of narrative, the album is an unofficial continuation of The Downward Spiral. Reznor compares the lyrical content of the two albums:

"I wanted this album to sound like there was something inherently flawed in the situation, like someone struggling to put the pieces together. Downward Spiral was about peeling off layers and arriving at a naked, ugly end. This album starts at the end, then attempts to create order from chaos, but never reaches the goal. It’s probably a bleaker album because it arrives back where it starts—[with] the same emotion”. The album begins “Somewhat Damaged” and ends “Ripe [With Decay]".

On the different track sequencing for different formats:

"Hello everybody. I've been doing a lot of European press lately and they've been mentioning the various configurations of 'the fragile' and wondering if there was a reason (other than to make the hard-core fan buy them all) to have some different tracks on them. If you're curious, here's why. We agonized over the sequencing of the record and focused solely on the CD config. as the definitive one. After the decision was made to move to two CDs the problem then became removing tracks to get the right feel and flow. Taking the new flesh' off the CD was a tough call because Alan and myself really like the track, but it destroyed the balance and it just didn't fit. When we assembled the cassette, we now had four beginnings and endings to contend with instead of two of each (for the CD) follow? It worked out pretty well just dividing the songs up, but we wanted the A sides of the cassettes to be slightly longer than the B sides (so that when the tape flips over you are not in the middle of the first song on that side). We added the 'appendage' to 'please' to make that work. For the vinyl, the decision to move to three discs was based on fidelity. (you can only fit so many minutes on a side of vinyl before it degrades the sound) So now we are faced with SIX beginnings and endings. Simply splitting the sides up didn't work as well this time so we decided to include the other two tracks we had been considering ('10 miles high' and 'the new flesh') as well as use the full unedited versions of all the other songs on the record. The vinyl sequencing has actually grown on me lately as a viable alternate! -just thought you might want to know…" 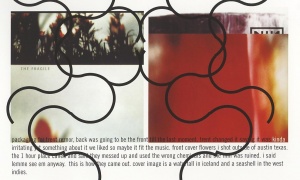 A look through David Carson's book Fotografiks reveals that the top section of the album cover is from a photo of a waterfall and the bottom section is from a closeup photo of the inside of some kind of seashell. He explained further in an image on his website:

"packaging for trent reznor, back was going to be the front till the last moment. trent changed it saying it was kinda irritating yet something about it we liked so maybe it fit the music. front cover flowers i shot outside of austin texas. the 1 hour place called and said they messed up and used the wrong chemicals and the film was ruined. i said lemme see em anyway. this is how they came out. cover image is a waterfall in iceland and a seashell in the west indies."

Bob Ezrin posted on ETS about his experience working on The Fragile.

"Trent was anything but brain addled at the time we were completing the Fragile. He was brilliant and feverishly recording and mixing in 3 rooms at the same time to complete the project on time for its scheduled release. What he had realized was that he'd created a work that was much longer than was practical to release and that wasn't quite hanging together the way he had hoped when he created its individual parts. Remember, there are thousands of bits of music and lyric that went into this record and they were recorded asynchronously. So he called me for help. Luckily, I had just come off another project and was able to head to New Orleans immediately—supposedly for a few days.

My job was to take all of this work and reorganize it to more practically and effectively tell the story that originally generated all these bits. Sort of like editing a film. Trent had "shot" more than he needed and it wasn't hanging together the way he wanted. But he was also tied to the other studios recording and mixing while this was going on so he needed someone he trusted to come in and take over the "editing" process and help his "film" hang together better.

And it was a totally thrilling process. We had SO much stuff and so much to say but we needed to tighten it up and review the pacing etc. So we were literally working round the clock for what turned out to be weeks until we finally nailed it and I was able to go home.

I loved working with him - and his whole team in fact - on this project. It just increased my respect for him as an artist and a man."

Recorded and mixed at Nothing Studios, New Orleans