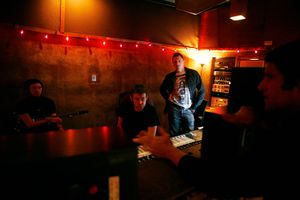 The Slip (also known as Halo 27) is the eighth and latest studio album from Nine Inch Nails. It was released as a free download on May 5, 2008, and contains the previously released Web-only singles "Discipline" and "Echoplex."

Originally, the physical product was intended to be released on July 22, 2008 in the US, Canada, and Japan as a numbered, CD/DVD package, limited to 250,000 units with the UK, Europe, and Australian unnumbered editions to be released on July 21, 2008, with the same content as the North American and Japanese editions. It is not known at this time why the decision was made for the numbers produced to be reduced.

On July 16, 2008, Trent Reznor posted two images of the physical product on nin.com. The post was entitled "The Beginning and the End". The first image shows him holding two copies of the album, hiding his face behind them. The second image shows the backs of both CDs. The one in back reads 1/250,000 and the one in front reads 250,000/250,000.

The Limited Edition also comes with three 4" x 4" stickers, each representing one of 9 illustrations to album songs (printed in booklet or individually embedded in distributed media files), with the difference that none of the stickers have the red lines. The stickers appear in consistent order, which allowed community to dub them 1st, 2nd and 3rd sticker packs and create The Slip Owners Database [1].

The cover of the insert is a new piece of artwork that depicts several light gray lines on a dark background (the same color as the one for 1,000,000). Five lines, two on the ends and three in the middle, all travel straight downward from the top edge to the bottom. Two more lines, in between the three middle and two outside, on each side, start straight downward, then slant inward, then travel straight downward parallel to the other lines before they would intersect the ones in the middle. These lines combined form the usual NIN logo (second "N" being backwards).

On May 5th, nin.com was updated with the title Halo 27 and a link to theslip.nin.com with the message: [2]

Multitracks for the songs were then posted for download from remix.nin.com

The high quality wave download torrent includes a subdirectory named "The Slip art", containing JPEG images. However, the file "02-1000000.jpg", has an incorrect file extension. This is actually an Adobe Photoshop CS3 (Macintosh version) file with a single layer and no significant meta information attached.

According to a Japanese interview with modwheelmood, the hand on the cover of The Slip is that of Alessandro Cortini, while the shoulder is Reznor's. Cortini also states that he did not actually play anything on the studio album, though his performances are included on the rehearsal DVD.

There also seems to be a mistake in the wave files; The track "The Four Of Us Are Dying" is mistitled "Demon Seed" and vice versa.

The final page of the PDF gives credit to "(c) 2008 niin." This appears to be a typographical error.

Audiophile message board Hydrogen Audio noticed mastering errors on the 24/96 high-def WAVs, which was followed by posters "ningineer" and "treznor" who wrote that they had recontacted the mastering studio and released the WAVs in addition to high-def FLACs.[3] On May 15th the nin.com Halo 27 blog post was edited with the message: "Some friends at hydrogenaudio pointed out an error with the high resolution WAVE files we didn't catch. The corrected files are now posted along with high resolution FLAC files as well. If you're interested in these, simply re-download the new files. Sorry for the hassle!"

A Google Earth KML file representing downloads of The Slip according to geographic region was made available from nin.com on June 26th, displaying over 1,400,000 downloads (not including multiple downloads) that had come from theslip.nin.com.