Difference between revisions of "This Isn't The Place"

"This Isn't The Place" is the third track on the 2017 EP Add Violence. It was first made available through the official Nine Inch Nails YouTube channel on July 18, 2017. Though currently only speculation, the unreleased song "My Dead Friend" seems to have a strong connection to the song's lyrics. At its live debut, Trent stated that the song was about David Bowie, and followed it by playing "I'm Afraid Of Americans".

"This Isn't The Place" made its live debut on September 13, 2018 on the first date of the Cold And Black And Infinite Tour. 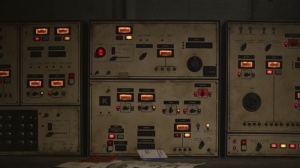 Screenshot from the "This Isn't The Place" video

An official music video was uploaded on July 18th. It shows the machine that is visible on the front cover of the EP and pans across it before starting to zoom out at the end. During this a package labeled "Sotirivol" by a company called Cedocore can be seen. Because of this, as well as the fact that the director and producer of the video (Alex Lieu and Susan Bonds respectively) are members of 42 Entertainment, it was presumed that a new ARG would happen. The video adds 6 seconds of silence to the start.

Further lyrics are printed on the physical component, that interestingly are a direct quote from "The Great Below":