"Deep" is a Fragile-era song made specifically for the Lara Croft: Tomb Raider soundtrack. Because of this, it has never appeared on a studio album.

The title and lyrics may be related to "Even Deeper."

This is the original version found on the Lara Croft: Tomb Raider soundtrack. A simple song in its structure, the verses feature a loud 4/4 drum loop and a permeating synthesized bassline surrounded by ambient loops. The choruses are distinguished by a permutation of the bassline punctured by wah guitar soloing. Reznor delivers most of the lyrics quite harshly in both sections.

This version is about 30 seconds shorter than the original.

Officially mastered, this vocal-less mix was released by Reznor through his remix.nin.com account. 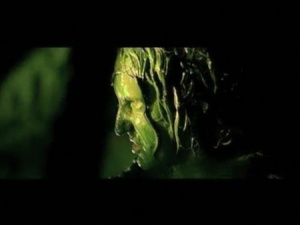 Screenshot from the "Deep" video

The music video for "Deep" was filmed in May, 2001, and directed by Enda McCallion. The story in the video is told in reverse, with the end of the story beginning the video.

SPOILERS BEGIN
Reznor plays a man who robbed an armored car carrying two security boxes containing a small fortune. When he subtly alerts his girlfriend that he's going to retrieve them, she wants in. They carry off the boxes, leaving in separate vehicles. What neither of them realize is that the boxes have been tamper-proofed with a highly caustic and corrosive dye. When they both try to break open the boxes, they get hit by the dye. In a panic and burning due to the dye, they both try to find each other, crashing their vehicles when they meet. Reznor manages to crawl out of his car and finds his girlfriend lying unconscious on the pavement. Intercut with these events is footage of a newscast in which the anchorwoman describes what has happened and what will happen if/when the dye hits human skin.
END SPOILERS


Described above is how the events happened, but the video begins with the car crash and ends with Reznor and his girlfriend deciding to open the boxes.

Michel Gondry was one of the directors who pitched a concept for this music video. Reznor ultimately selected a different pitch, but the next year Gondry used the concept for Kylie Minogue's "Come Into My World" music video. [1]