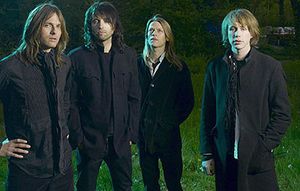 Mew is a Danish alternative music band consisting of Jonas Bjerre, Bo Madsen, and Silas Utke Graae Jørgensen. They toured with Nine Inch Nails throughout the European part of the Wave Goodbye Tour.

Bassist Johan Wohlert was also a founding member of the band, but left in 2006.

Whilst their music may be classified as indie and on occasion (like on And the Glass Handed Kites) progressive rock, they sometimes humorously refer to it themselves as "pretentious art rock", or in guitarist Bo's words, "the world's only indie stadium band".