NIN: Access is an application for the Apple iPhone and iPod touch, released on 15th April, 2009.

It allows the user to:

The application apparently cost Trent Reznor around $10,000 to build, and could one day be released for platforms other than Apple's media devices, although they would all have to be fully compatible with Google Earth software, and thus far only Android and Blackberry have shown interest. It is a highly unique application, both for the iPhone and for bands in general, as it allows communication en masse with the NIN fanbase without any high subscription or costs. 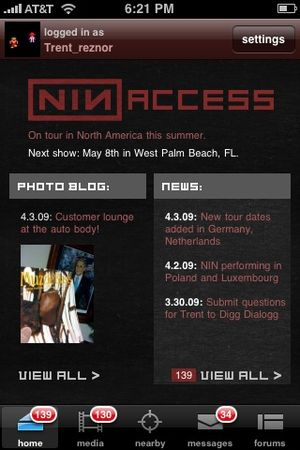 The application in action

Parts of the application can be used an accessed from access.nin.com, but the full usage will never be available without a mobile device, specifically the "Nearby" section, explained here:

The idea behind Nearby is to facilitate local interaction between fans - particularly at shows - and opening that up to the web would defeat the purpose - which is why, for now, only mobile users can interact with Nearby.

Our thinking is this: allowing people to contribute to a location-based "chat" or conversation without actually being there would only reduce what's happening to a giant, cluttered chat room. Between forums, the CHAT section on nin.com and Twitter itself, we feel you have plenty of ways to interact outside of this. Remember, all of this is malleable. We may find this doesn't work so well and people don't use it the way we've intended / imagined, in which case we'll readdress. For the time being, please give this approach a chance and let's see what happens.

It has been hinted that the application will also one day include live, streaming video from live concerts.

On May 2nd, Reznor announced via Twitter that an updated version of NIN:Access had been rejected by Apple because it contains objectionable content. The objectionable content referenced is "The Downward Spiral". Further details of the rejection were posted by Reznor in the NIN Forums:

Thanks Apple for the clear description of the problem - as in, what do you want us to change to get past your stupid fucking standards?
And while we're at it, I'll voice the same issue I had with Wal-Mart years ago, which is a matter of consistency and hypocrisy. Wal-Mart went on a rampage years ago insisting all music they carry be censored of all profanity and "clean" versions be made for them to carry. Bands (including Nirvana) tripped over themselves editing out words, changing album art, etc to meet Wal-Mart's standards of decency - because Wal-Mart sells a lot of records. NIN refused, and you'll notice a pretty empty NIN section at any Wal-Mart. My reasoning was this: I can understand if you want the moral posturing of not having any "indecent" material for sale - but you could literally turn around 180 degrees from where the NIN record would be and purchase the film "Scarface" completely uncensored, or buy a copy of Grand Theft Auto where you can be rewarded for beating up prostitutes. How does that make sense?
You can buy The Downward Fucking Spiral on iTunes, but you can't allow an iPhone app that may have a song with a bad word somewhere in it. Geez, what if someone in the forum in our app says FUCK or CUNT? I suppose that also falls into indecent material. Hey Apple, I just got some SPAM about fucking hot asian teens THROUGH YOUR MAIL PROGRAM. I just saw two guys having explicit anal sex right there in Safari! On my iPhone!

Come on Apple, think your policies through and for fuck's sake get your app approval scenario together."[1]

It was announced on May 7th that the application update had finally been approved by apple, once again, via Reznor's personal Twitter account; "NEWS FLASH: Apple has approved the NIN iPhone app update. Should be live in a few hours." Shortly after it was detailed that the update would "fix the international crashing issues" This was then confirmed by Rob Sheridan via Twitter ("Our NIN iPhone app has finally been updated. If it wasn't working for you before, try the new 1.0.3 update at http://access.nin.com/download") and many NIN Fans across the world using the Nearby function of the app.