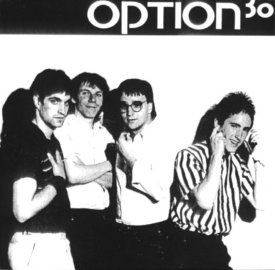 Option 30 was founded in 1982 by TK Smith on guitars and vocals, Jim Nordstrom on bass and saxophone, Todd Nero on drums, and teenager Trent Reznor as a vocalist and keyboardist. Following Reznor's departure from the band in 1984, Option 30 continued as a trio until their split in 1986.

The only known album release by Option 30 is a self-titled CD released in 1997 on Shriek Records. It consists of demos and an interview at a college radio station in Edinboro, Pennsylvania, recorded in the summer of 1983. Only 1000 copies of the album were made. After a Nine Inch Nails Web site linked to Shriek's site, the label seemed to have disappeared.

Reznor had little to no input in the songwriting process, as most of the songs were written by Nordstrom and Smith. In addition to the original songs on the album, there are also three covers: "Icehouse" (originally recorded by Icehouse), "Der Kommissar" (originally recorded in German by Falco, covered with English lyrics by After The Fire), and "Lies" (originally by the Thompson Twins).

This was Reznor's first band and his time in it was followed by a stint in The Urge.