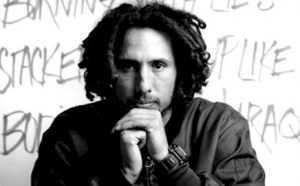 Zacarías Manuel de la Rocha (born January 12, 1970 in Long Beach, California) is a rapper, musician and poet. He is commonly known as the vocalist for the political rock band Rage Against The Machine, he was also a member of the bands Hardstance and Inside Out and currently is a member of One Day As A Lion with former Mars Volta drummer Jon Theodore.

After leaving Rage Against The Machine in 2000, Zack pursued a career as a solo artist and began working on a solo album with Trent Reznor in which 20 tracks were produced. However Zack was unhappy with the album and the project was abandoned despite Reznor thinking the tracks were excellent. Reznor has stated that a release of the album is unlikely anytime soon.

Rage Against The Machine

One Day As A Lion