Difference between revisions of "The Social Network Soundtrack"

"I was planning on taking some time off after the continual waves of touring that ended last fall and spend this year experimenting around with what would become How To Destroy Angels and some new NIN. Well, that plan didn't work out so well. David Fincher started inquiring about my interest in scoring his upcoming film, The Social Network. Yeah, the movie about the founding of Facebook. I've always loved David's work but quite honestly I wondered what would draw him to tell that story. When I actually read the script and realized what he was up to, I said goodbye to that free time I had planned. Atticus Ross and I have been on a creative roll so I asked him if he wanted to work on this with me and we signed on.

Speaking of the film... it's really fucking good. And dark!"

"This is what Atticus and I have been working on for the last few months. We had a great time working with David Fincher on this and the film turned out excellent - something we're very proud of. It opens in theatres Oct 1 and you should check it out.

Regarding the purchase options, sorry about the "clunkiness" of not offering the full record digital download pre-sale (and having to visit Amazon). My agenda was to be able to offer this for the lowest possible price and this was the best way to achieve that. Amazon has been a great partner with past projects and I appreciate your understanding."

The first track from the soundtrack, "Hand Covers Bruise (No Piano)" debuted on The Social Network's website on August 30, 2010, streaming in the background. The album will be released by The Null Corporation and distributed by Sony Music. 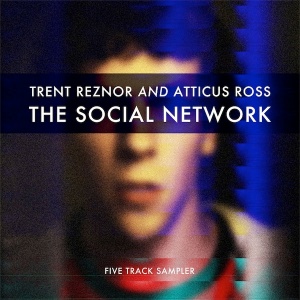 The album was released digitally on September 28, exclusively on Amazon.com, and will be available in three physical formats: CD, Blu-Ray audio and Vinyl, released on October 11, 18 and 25 respectively.

On the album's official FaceBook page, a promotion for the movie was created on September 22nd, offering fans the chance to remix "On We March" and "In Motion", to win a chance to meet Ross and Reznor in Los Angeles, along with a seat at the film's première.

The Social Network Soundtrack is available for download on Amazon MP3

The album's art is by Rob Sheridan, based upon the designs used to promote the film, mixed with Sheridan's style of image distortion.[1][2][3][4]

On the album's official FaceBook page, it was announced that it was planned for a remix EP to be released, of the best of fan remixes, and that many more multitracks would be released for the purpose.