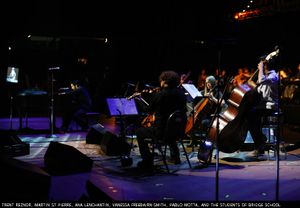 These concerts were unique in that they were the first (and so far only) solo acoustic concerts for Trent Reznor, though he also appeared solo for two songs at the ReAct Now Hurricane Katrina Benefit in 2005. He was backed by a string quartet, playing a selection of Nine Inch Nails songs, including instrumental pieces.

In a 2020 interview[1], longtime NIN booking agent Marc Geiger said of the show, "I remember him doing the Bridge School Benefit for Neil Young, he played with a string quartet, and we were in tears. Neil Young came back into the dressing room and said it was the most powerful, most innovative performance that had ever been at the Bridge School. That's kind of what Trent does, and that's what I take from him."

The stage set-up for both of these performances was very basic. Bridge School students and their parents got to sit at the back of the stage to view the performance. Lights shone on Reznor and the string ensemble while large monitors above and around the stage projected the performance.

This setlist was the same for both shows: