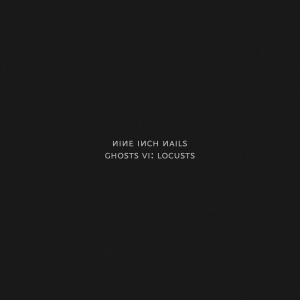 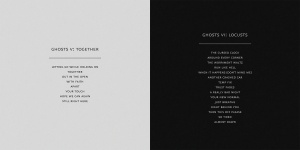 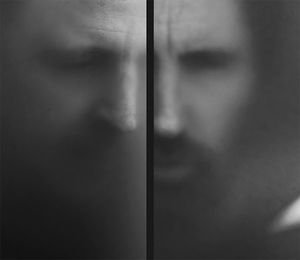 "Ghosts Portrait" of Reznor and Ross by Kraw

The artwork was by Kraw, who posted this message on his instagram page.

In the last couple of weeks I’ve been listening to these albums while taking quiet walks in the morning when the world seems relatively peaceful and calm and I've also left my headphones in while going to the grocery store (which is a quick reminder of the opposite). GHOSTS V-VI end up being an appropriate soundtrack for both of those experiences.

The difference between the moods of GHOSTS V: TOGETHER and GHOSTS VI: LOCUSTS is something we wanted the art to reflect. Lots of ideas were explored and ultimately presenting the album art as clean isolated type on nearly inverted backgrounds for each album was what resonated with us the most.

The art is almost the opposite of what I was thinking the next album from NIN might look like if you'd asked me two months ago, but so is what I would have expected March 2020 to look like.

Regarding the new photo of Trent and Atticus, it's not exactly new. All of us have been doing our part by working remotely so an in-person photoshoot wasn't an option. I'd briefly considered coming up with a way to stylize some facetime screen grabs of them, but then I remembered some photos I took of them obscured by diffusion material a few months ago. The soft hazy look didn't make sense for anything at the time they were taken, but in the context of today they felt right for these new albums.

I'm glad everyone can listen to these albums now. I know NIN's music has made me feel less alone in this world for many years and these albums do the same. That being said, I can't entirely in good conscience endorse listening to GHOSTS VI: LOCUSTS while shopping for groceries in the middle of a pandemic.