This tour took place during February 2014. It was part of the NIN 2013-2014 touring cycle. The opening act was Alessandro Cortini. One show also featured a guest appearance by Mariqueen Maandig for covers of songs by How To Destroy Angels. 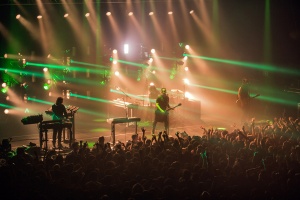 The minimal production for this portion of the tour meant that the setlists could be readily changed up. The sets were very different across the three nights, as they were all taking place in the same city at the same venue. This was perhaps also to make up for the fact that NIN had not played in Japan for seven years.