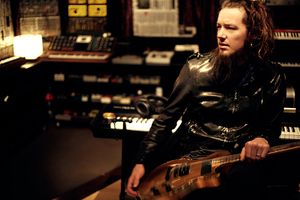 Finck is a noted bird enthusiast, and his website discusses his fascination with them. Many NIN fans have noted after hearing of his avian fascination that many of his changes to NIN songs during the Fragility tour stems from his bird-sound-inspired choice of guitar tones and sounds. This is especially notable on the pre-solo section to "The Wretched" and "Just Like You Imagined." Finck appears in the NIN music videos for "March Of The Pigs", "Hurt" (live), "Eraser" (live), "Wish" (live) and "Into The Void". In 2017, he appeared as part of Nine Inch Nails (in this case consisting of Trent Reznor, Finck, Mariqueen Maandig, Atticus Ross, Alessandro Cortini and Joey Castillo of Queens Of The Stone Age) in an episode of the reboot of Twin Peaks. In 2020, Finck got his own signature guitar model, made by Reverend. In 2021, Finck co-founded game studio Eyes Out.