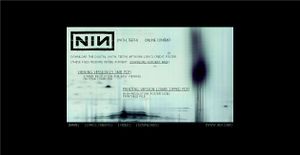 nin.com/with_teeth was a part of nin.com that was set up for the release of With Teeth. An archived version of the site is available here.

The site also has a PDF file containing lyrics to all the songs on the album, as well as lyrics to the unreleased songs "Message To No One", "The Warning", and "The Life You Didn't Lead". The file is available in a small size for viewing on a computer, and a large size for printing as a poster. It was meant to replace the traditional album booklet which would normally accompany a physical release. Trent Reznor posted on his blog at nin.com, explaining his choice to not include a booklet: