The Hand That Feeds (song)

"The Hand That Feeds" is the fourth track and first single from With Teeth, and it has received the designation of Halo 18. It began playing on Nine Inch Nails' official MySpace page before its radio release, and leaked in February of 2005 along with "Getting Smaller" and "The Line Begins To Blur". The multitracks for this song were released via nin.com.

"The Hand That Feeds" is a verbal attack on the United States Government, specifically the Bush Administration and its foreign policy, but can be interpreted as speaking out against abusive authority in general.

Nine Inch Nails was scheduled to perform this song live at the 2005 MTV Movie Awards, but MTV denied Trent Reznor's request to perform in front of a large image of President George W. Bush's face. As a result, Reznor decided to cancel the performance. NIN was replaced by the Foo Fighters.

We were set to perform "The Hand That Feeds" with an unmolested, straightforward image of George W. Bush as the backdrop. Apparently, the image of our President is as offensive to MTV as it is to me. See you on tour this fall when we return to play in America.

The Hand That Feeds

The Hand That Feeds (Instrumental)

The Hand That Feeds (DFA Mix)

This remix was available as an iTunes exclusive until it was released as the second track on the Every Day Is Exactly The Same EP.

The Hand That Dubs (DFA Version I)

The Hand That Feeds (Photek Dub)

The Hand That Feeds (Ruff Mix)

Featured on the Japanese release of With Teeth as track 16. It was also available to download at remix.nin.com.

The Hand That Feeds (Beside You In Time)

A live version featured on the Beside You In Time DVD. 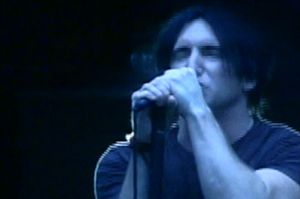 Screenshot from the "The Hand That Feeds" video

The music video for this song was directed by Rob Sheridan and Reznor, debuting at NIN.com on March 17, 2005. It's a basic performance video, filmed with a digital camera in the band's rehearsal space. The film has been tinted blue and some distortion does occur, due to the nature of the camera and how it responds to fast movements. The video also features a digital zoom—the image appears so pixelated and interlaced because Sheridan used key-framing to create digital camera movements and zooms in post, giving the visuals an even grittier feel.

The video caused quite a stir throughout the NIN community. Some didn't like the song, whereas others weren't even sure that this was the official video as it didn't look "done" to them. Still others were quick to note a noticeable change in Reznor's physical appearance.

Initially, there were plans to create an animated video using GNN, the same company that created Eminem's "Mosh" video.[1] The plans were scrapped sometime during pre-production, after a synopsis of the plot and a casting sheet were leaked to the internet, and because the end result was poorly received by Reznor and Sheridan.

"The Hand That Feeds" has been played live regularly since its debut on March 23, 2005.

During the September 6th, 2008 performance of the song at the Forum in Inglewood, California, a photo of George W. Bush was displayed behind the band, and as the band played the photo gradually morphed into John McCain.