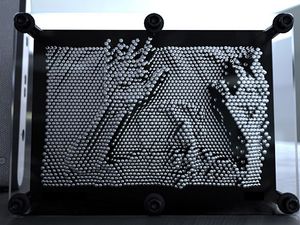 The music video for "Only" was directed by David Fincher and was largely created using advanced CGI by visual effects company Digital Domain. It features a desk with a laptop (A 17" Mac PowerBook), speakers, a cup of coffee, a Newton's cradle and a Pin Art desk toy being brought to life and animated by the music. The video starts with a hand pressing the space bar on the computer, which starts its music program (iTunes with the Visualizer turned on). The Newton's cradle begins to sway to the beat as ripples appear in a cup of coffee. Reznor appears in the Pin Art, singing the song. As it gets to the second verse, the songs builds and the vibrations get more intense. Reznor seems to almost break out of the Pin Art as the balls on the cradle sway almost uncontrollably. The ripples in the coffee also have greater frequency. The climax of the song dislodges the top-most apple in a nearby bowl, after which Reznor's impression walks off and the scene dies down. At the very end, a blurry image of a car can be seen driving away. The video was almost entirely computer-animated, with Reznor filmed live in front of a green screen and then mapped onto the Pin Art. It is reported that the only parts that were live-action were the hand at the very beginning (that of Fincher) and the bowl of apples at the end.

In a 2005 interview with Kerrang[2], Reznor gave the following insight:

It's about the business. When you get on this path of trying to sell records it becomes about selling more records and playing bigger venues. It's like, "I'm friends with Tom Morello but Audioslave are releasing something on the same day as us and I must destroy him." It's like, "Wait a minute!" The goal has to be about making the best music possible or else it becomes something that will make you implode. Although, I'd rather have money than not because I know what not having it is like and not being able to pay the gas bill sucks. I feel lucky that I can do this but I constantly have to remind myself what the goal is. Should I say yes to that Microsoft commercial because I could use a new house? Or do I say no because this is something precious that would be tarnished if I did that? I find myself saying this to record labels and business manager guys, and they're like, "You won't do what because of what?" My feelings were hurt when I heard David Bowie's "Heroes" on a fucking Microsoft commercial. It's like, "Why? Fuck!"

"Only" made its live debut on the third show of the With Teeth Fall Arena Tour, and quickly became a setlist staple. This would continue for multiple tours, with "Only" appearing at most shows on the Performance 2007 tour and almost every performance on the Lights In The Sky Tour.

The song was played with live drums until 2014, when Ilan Rubin began playing bass while the band played to a backing track.