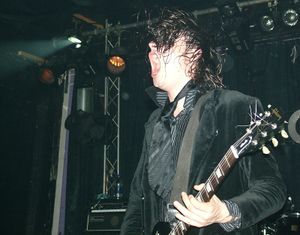 Rich Fownes (born October of 1983) is the guitarist for the British rock band The Eighties Matchbox B-Line Disaster, having also played guitar live with With Scissors and UNKLE. On April 4th, 2008, it was announced that he would be a multi-instrumentalist in the live band for Nine Inch Nails, however in a nin.com update on June 5th, 2008, it was announced that the live band no longer included him.

Fownes was born and raised in London and moved to Brighton at the age of 19. At 12, he took up guitar after first listening to Nirvana and lists Dave Grohl as one of his biggest influences. It wasn't until Fownes arrived in Brighton that his career began to take off. He became the guitarist for With Scissors and later joined the Eighties Matchbox B-Line Disaster, catching the attention of UNKLE at a stadium performance opening for System Of A Down. The band was invited to play on UNKLE's 2007 album and joined them on tour, scoring an opening gig for Nine Inch Nails in Tel Aviv.

In late 2007/early 2008, Fownes received an e-mail from Trent Reznor, inviting him to Los Angeles to audition for the latest live incarnation of Nine Inch Nails. Fownes was announced as a new addition to the band on April 4, 2008.