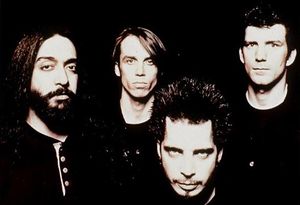 Soundgarden is an American alternative rock band who co-headlined with Nine Inch Nails during the NIN 2013-2014 tour.

The band was formed in 1984 and were one of the progenitors of the grunge movement, though their early sound was more rooted in metal and their later sound was more rooted in psychedelia. They released what is widely considered their masterpiece, Superunknown, on the same day as The Downward Spiral. The band broke up in 1997 but reunited in 2010. The band was ostensibly ended with singer Chris Cornell's death in 2017.