The Presence is a ghostly arm reaching down from the sky. It was initially thought to be drug-related hallucination, but this was debunked by people who claim to have seen or been affected by The Presence, but who are not under the effects of Opal or Parepin. [1] [2] It has been suggested, however, that use of Opal or Parepin may intensify or increase the frequency of these encounters. People who have been affected by The Presence have described feelings of intense fear, insignificance, astonishment, and forgetfulness.

Gradiosity describes his interaction with The Presence:

A buddy and I were getting our asses kicked by a couple cops after they caught us tagging a wall. I remember hearing this crack like thunder right overhead. Next thing I knew, we were all standing there, looking up like baby birds. One of the cops was crying. We were all shaking. It was like realizing I’ve spent my whole life underwater and finally looking up and seeing *real* life on the other side of the surface. The cops just left us, just forgot about us. But we didn’t notice because we’d forgotten about them.

The number of fingers on the hand in the vision is unclear; photographs of the phenomenon suggest that it has four, but other media, such as the drawing in nooneimportant's mailbox or the spectrographic image contained in My Violent Heart, clearly show five. The hand could possibly be curled slightly in the four fingered versions, as this would cause the pinky finger to be covered by the palm.

The Presence concept seems to reference one stanza of "The Wretched" from The Fragile:

Also, it seems the lyrics from The Warning directly refer to The Presence.

On July 16, 2007, some high-resolution wallpapers were uploaded to the site yearzero.nin.com, including two with The Presence. The first one is the picture found on the album's cover, while the second one is a depiction of The Presence similar to the one found in the leaked version of My Violent Heart and the album version of The Warning. 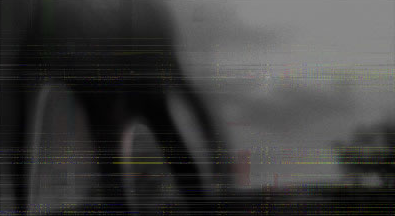 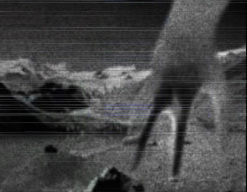