"My Violent Heart" is the eighth track and was the first song to leak from the 2007 release Year Zero. Multitracks for this song were released in raw WAV, GarageBand and Ableton Live formats via remix.nin.com. The song's drum pattern is very similar to that of "God Given".

This has lyrics from MVH. Most likely MVH is about this particular World of Year Zero character.

An amazing discovery was made while analyzing the content of the leaked MP3. In the last few seconds of the song there is an awkward bit of static. Running the audio file through an audio spectrometer, a distinct image was found within the static. It is indeed "The Presence" from the Year Zero concept. In the album version of the song, the static and image are not present. They are at the end of The Warning.

Viewed through a linear spectrometer. 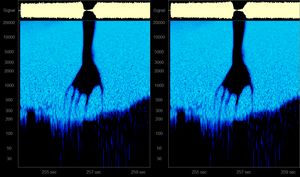 Viewed through a logarithmic spectrometer.

At the February 12th, 2007 Nine Inch Nails concert in Lisbon, Portugal, a plain-looking USB flash drive was found in a bathroom stall. It was later found to hold a single MP3 file with the title "My Violent Heart". The numeric sequence "24.3.2" was found within the MP3's ID3 tag of the leaked copy.

This is the album version of the song. It begins with looping percussion and vocals soon enter. Just before the chorus, a synthesizer plays as a climax builds. The chorus contains mechanical and robotic noises layered in a very industrial way, creating a very rhythmic wall of sound. The bridge of the song contains guitar parts that have been heavily edited and chopped up.

This unmastered vocal-less mix was released by Trent Reznor through his remix.nin.com account.

This version of the song has the static at the end of the song, revealing "The Presence".

This fan mix by Pirate Robot Midget was initially posted at NIN Remixes and can be heard on Y34RZ3R0R3M1X3D. It contains a more dance-oriented beat than the album original and has a considerably shorter running time than the album original. Interestingly enough, the version that appears on Y34RZ3R0R3M1X3D has some sound elements not heard in the original remix, the most noticeable of which is a beeping noise heard in the background. This sound is almost reminiscent of an ECG (electrocardiograph) machine commonly found in hospitals.

"My Violent Heart" has never been played live, the only Year Zero song with vocals to have not been performed.

The fourth line of the first chorus is shortened in the actual recording: