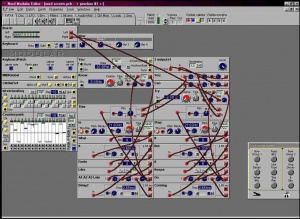 This is the original album version. Characterized by a simple drum machine loop and a low-octave piano melody backed by deep atmospheric synthesizers, the verses feature Trent Reznor spitting out the vocals, soon joined by a distorted guitar melody. The repeated lyric, "It didn't turn out the way you wanted it to, did it?" builds into the chorus, where a new, quickly ascending guitar riff and a different drum patch and loop accompany the shouted vocals. New atmospheric loops join the re-entry of the verse motifs, which lead into a repetition of the chorus. The song's bridge consists of trading distorted guitar riffs above the verse drum patch and atmosphere, which give way to a simple melody. The chorus soon returns with a wah guitar solo on top, bring in the return of the chorus vocals, this time with Reznor interjecting between repetitions of "now, you know/this is what it feels like." After the final repetition, the verse atmospheres and drum loop return for a fading denouement and return of the bridge melody.

The vinyl edition of The Fragile has an extended ending, playing out much like it does live on And All That Could Have Been: instead of the beat fading out under the melody as on the CD, it repeats four times and then stops, allowing the melody to repeat once more.

Released exclusively through Apple Music as part of The Fragile Instrumental and later on The Fragile: Deviations 1. Opening with the acoustic guitar riff featured prominently in the Things Falling Apart remix, the song proper retains the album arrangement, though its ending is the full version previously heard on the vinyl. The bridge featuring the plucked melody is also extended by one repetition of the distorted guitar phrase.

This remix starts with a bass drone and rhythmic loops that build to a loud, drum-heavy second verse. It eventually breaks down to acoustic guitar playing the chorus riff and the lyrics "Now you know/This is what it feels like" before building again towards the end, which drops back to the elements used in the intro along with what appears to be a live version of the end of the song from a concert in the distance.

This live version is performed very similarly to the album version, with Jerome Dillon playing a tom-based beat on top of the electronic loop. During the bridge, Reznor whispers the lines "There is a place / In the back of my mind / Where I used to try."

"The Wretched" made its live debut at the first show of the Fragility v1.0 tour, and has been played at the majority of shows since.