This website was found through The Price of Treason where this site is credited to "Neil Czerno".

The site encourages you to submit subversive work or platforms by which the work can be distributed to submit@opensourceresistance.net with the suggestion that the work will be published somehow. The work should follow the guidelines of anything which is intended to raise awareness of the issues which could lead to Year Zero.

Submitting to the request for subversive art or platforms elicits the following emailed response:

If you reply to that, you'll get the same thing over again.

People subscribed to the email list received the following:

On April 13th many LA locals met at The Melrose Location which led to the first meeting of the OSR on April 18th 2007.

A video of the first OSR LA Meeting is available:

Czerno And Art Is Resistance

The creator of the website, found through The Price of Treason. The Price of Treason says he was executed Feb. 4, 0000, one day after a post on Another Version of the Truth was made, talking about how the creator of Art Is Resistance was "disappeared" by the government. Many people speculate that this Neil Czerno had also put up Art Is Resistance.

Czerno seems to have been the one to first use the "AIR flag", since it appears on this page numerous times. The star field of the flag is actually a lower-case r, finishing the abbreviation "OSR" in the site's logo. The star field also appears without stripes at the bottom of the page, as if it were a final word on the subject - "resist.". 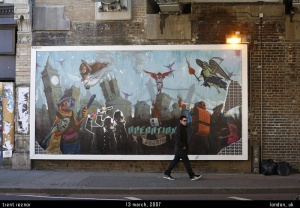 If one looks closely at the London mural image, there are three areas of the mural that have been torn away. Within the underlying areas of the tears, one can see a repeating motif of the Art Is Resistance flag. The mural is also present in a photo posted in the 'current' section of the official nin.com website.

On the Submissions Page you can view various subversive art pieces. One in particular, titled Fairytale, leads to Sentiments of an American Woman and a short movie from the National Welfare League. The phone number on the movie clip is the White House Comment Line.