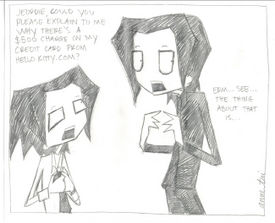 Squires Of Dimness is a web comic on the Aaron North fanblog North Side drawn by Anne Tai that revolves around the daily routines of Aaron North, Jeordie White, Alessandro Cortini and Jerome Dillon. While Trent Reznor is mentioned several times during the comic, he is never shown.

Aaron North in Squires Of Dimness.

Aaron is the main character of Squires Of Dimness. He is shown with an immense love for ice cream -which he regularly steals from Squire White- and his hanky. He strongly dislikes coconuts; even just the taste of one. He is drawn very short compared to the rest of the band. When the comic was presented to him during an interview and was asked to identify the people drawn, all Aaron said was "Dude… I’m not that much shorter than Jeordie!". [1]

Jeordie in Squires Of Dimness.

Jeordie is portrayed as the realist of the band. He often thinks things through in an attempt to make the perfect choice. This often backfires, however. He has a secret obsession with dancing and singing "I'm Too Sexy" to his mirror. He shares Aaron's love for ice cream.

Alessandro in Squires Of Dimness. On the far left side.

Alessandro, or "Ally" as he is referred to in the comic, is heavily reliant on Italian culture. He is often seen eating some sort of pasta or yelling in Italian. He has really small, beady eyes (perhaps a way to tell him and Jeordie apart due to their similar look.). He owns a "Pear" laptop which is an obvious parody of Mac computers. While he dislikes coconut ice cream, his dislike of the flavor is not as intense as that of Aaron's.

Jerome in Squires Of Dimness.

Jerome makes few appearances in Squires Of Dimness. When he is featured, he is portrayed as very laid back and casual and a bit fey. He is often depicted holding a newspaper. He also carries a somewhat maternal demeanor. He has an obvious affection for his fellow squires, especially it seems, for Aaron. His personality is somewhat of a mix between Alessandro and Jeordie.