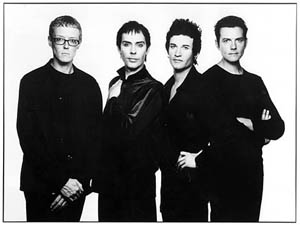 Bauhaus is an influential English rock band considered to be one of the founders of Goth Rock. The band co-headlined with Nine Inch Nails during their Summer Amphitheatre Tour in 2006. The band originally split in 1984, but has resumed activity three times since disbanding, in 1998, 2005/2006, and 2019. The band has stated that its 2008 album, Go Away White, was its last.

Lead singer Peter Murphy collaborated with Trent Reznor for several special radio appearances. NIN was also the opening act for a Murphy's Deep Tour in 1990. NIN performed a cover of the song "Kick In The Eye" during the Wave Goodbye Tour in New York City on August 25, 2009, with Murphy joining the band on stage. He appeared with the band during several other shows on that tour's final leg.