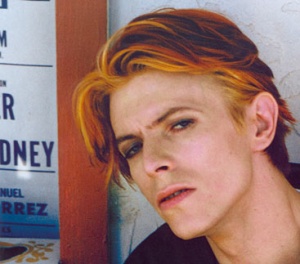 David Bowie (born David Robert Jones, January 8, 1947–January 10, 2016) was an influential musician and actor, actively creating music from the 1960s until his death in 2016. He traversed through many genres and styles, and oftentimes has influenced, worked with, and coincided with Nine Inch Nails and Trent Reznor.

Relating to NIN and Trent Reznor

Reznor said in interviews that he played Low constantly during the recording of The Downward Spiral for inspiration. Incidentally, Reznor has been accused of using the main melody from Bowie's 1980 instrumental single "Crystal Japan" in Nine Inch Nails' 1994 track "A Warm Place." Reznor explained the similarity in an interview.[2] The half-song, half-instrumental approach of Low was also a reference point as The Fragile was being written.[3]

The line "falls wanking to the floor" from Bowie's 1973 song "Time" was featured in several remixes of "Mr. Self Destruct" from Further Down the Spiral. A reversed sample from the end of Bowie's "It's No Game" runs through the background of "Pinion".[4] The lyrics to "We're In This Together" may be inspired by Bowie's song "Heroes".

Bowie also possibly drew some influence from Nine Inch Nails. A beat similar to that of "Closer" was used in Bowie's 1997 track "Seven Years In Tibet" (the kick drum that was sampled for "Closer" had been taken from "Nightclubbing" by Iggy Pop, a track that was co-written and produced by Bowie.) Taking a cue from photographer Joel-Peter Witkin, the music video for "Closer" contains a scene of a bald woman wearing a black mask with a crucified Jesus on it. Though the influence could have come directly from Witkin instead of "Closer", a similar mask is worn by Gail Ann Dorsey in Bowie's 1997 video for "Dead Man Walking".

"… In making The Downward Spiral, {Reznor} encouraged the computer to misconstrue input, willed it to spew out bloated, misshapen shards of sound that pierced and lacerated the listener…" [5]