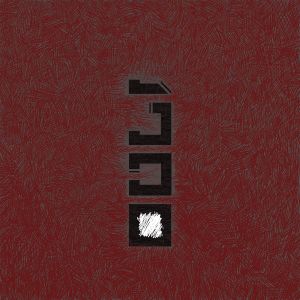 "Demon Seed" is the tenth and final track from the Nine Inch Nails album The Slip. Its lyrics follow the same structure as "The Greater Good" and "The New Flesh," and the song uses the same drum loops as "38 Ghosts." Its time signature is 6/4, as Trent Reznor can be heard indicating in the song. Multitracks for this song (and all others from The Slip) were released in raw WAV format via remix.nin.com.

The image associated with this song appears to be a four part image of a square becoming more complete or "growing," much like the lyrics portray something growing inside of the narrator. It should also be noted that the red lines seen in the previous pictures are all over, as if they have exploded out of control. In a Patreon Q&A session[1], Rob Sheridan was asked about the art for "Demon Seed" and he explained that it was "the end of the journey of the red line that moved through the artwork of that record, trying to make sense of the rigid forms, sometimes fighting them, before finally overtaking them. It was Trent's idea to have the line take over 'Demon Seed' so completely/aggressively. It tied in to the meaning behind the music, which isn't my place to discuss as TR tends to keep that stuff close to his chest."

This is the original album version. Very similar in structure to the preceding piece, "The Four Of Us Are Dying," it begins with drum loops, building with layers of synthesized bass and guitar. Reznor's vocals are scattered and manipulated throughout the song, which transitions suddenly into a quieter, ambient bridge. Distant echoes of vocals, riffs, and drums from the first section are manipulated in brief, eventually leading into a final section with Reznor's count-in. Climaxing with the return of the drum loops and layers of distorted synthesizers, it soon strips layers away piece by piece, ending itself and the album suddenly following the repeated whispers of "There is a seed/Inside of me."

There was, however, a brief clip of drummer Ilan Rubin rehearsing the song posted online: http://www.youtube.com/watch?v=u8pX55FJNNQ

In the final studio cut, verse 4 is repeated 3 times, followed by a count of "one, two, three, four, five, six" just before verse 5 kicks in. Verse 3 and the last line of verse 6 are not sung.