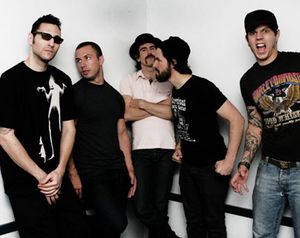 The Dillinger Escape Plan in 2009

The Dillinger Escape Plan was an experimental metal band that was formed in Morris Plains, New Jersey in 1997. Since the initial formation of the band many changes have been evident, mostly the vocalist position, with the current vocalist being Greg Puciato. The band announced its breakup and final tour in 2016.

Dillinger Escape Plan is well known within the NIN community due to the studio cover of "Wish" on the Plaigerism EP and frequent on stage performances with NIN. Guest performances between the bands occurred during the 2009 Wave Goodbye Tour and they were later chosen as one of the openers for the NIN + Soundgarden Tour.