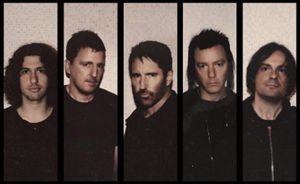 After recording a new album, the assembly of a new band usually follows, along with extensive touring; the live component of Nine Inch Nails is largely considered a separate entity from NIN in the recording studio. NIN's live shows often involve visually spectacular elements such as screens and lighting rigs (with more basic elements having been used on the Self Destruct and Fragility tours, and more sophisticated ones on the With Teeth Fall and Spring Arena tours, Performance 2007, Lights In The Sky and NIN 2013-2014 tours) and earlier shows would sometimes culminate with the destruction of musical instruments.

Bon Harris of Nitzer Ebb stated in an Instagram message with a fan that he was considered as a live keyboard player for NIN, and it is assumed that this was during the years when Nitzer Ebb was inactive. Martin Atkins was also considered as the drummer for the Lollapalooza Tour in 1991.[1]