"Wish" is the second track on 1992's Broken EP, and displays that era's characteristic aggression and abrasive guitar attack. The song won a Grammy Award for "Best Metal Performance." It keeps with the general mood of the Broken EP and includes numerous angry and self-deprecating lyrical passages, but unlike other songs, also shows a desire for something more.

"Echoplex" features similar wind synthesizer sounds, but they do not appear to be direct samples from "Wish". As well, the bridge of "Wish" shares its chord progression with the chorus of "March Of The Pigs".

This is the original album version. Opening with percussion and noise loops, Reznor's quick verses work in call-and-response with an equally quick distorted guitar attack. Each verse eventually opens up into a sustained chorus based around guitar power chords. The synthesizer-driven bridge introduces a new chord progression (including whispers of the final two lines of lyrics) before returning to the verse guitar parts, a final chorus, and a coda made of the verse guitar parts again, which suddenly cut off to a quiet, ascending white noise manipulation that segues into "Last."

This a censored version of the original, distributed on a promo to U.S. radio stations. The censorship is accomplished by completely silencing music when a bad word is said.

This a censored version of the original, distributed exclusively on 7" promo vinyl to U.K. radio stations. The censorship is accomplished by word/sound substitution when a bad word is said. Instead of cutting off abruptly, the ending guitar riff is repeated to fade-out, resulting in the longer runtime.

This remix elaborates on the drum and synthesizer loop of the original. The cymbals are run through a wah effect, making them sound as if underwater. Its structure essentially follows the original, but with production changes and lengthening of the introduction and ending.

This remix mostly consists of manipulations of the drum loop, though it also loops several of the guitar parts toward the end, which ascend in tempo until crashing thunderously. It also contains samples from the musical Showboat and some psychedelic narration by Timothy Leary. Interestingly, Skinny Puppy had used the same Leary samples on their song "Left Handshake," but were forced to remove the song from their Last Rights album due to clearance issues. "Fist Fuck" was heard in the film Resident Evil, in the scene where Alice (Milla Jovovitch) fights the zombie dogs.

This is the first of two live performance videos of the song on Closure, recorded in bootleg-like quality.

The second performance video of this song on Closure, it is featured on the second disc and is professionally recorded. It follows the live music videos for "Eraser" and "Hurt."

Wish (And All That Could Have Been)

This version uses the same arrangement as the live version on Closure. Here, the song is used to return from the slow section of the concert setlist.

Wish (Beside You In Time)

This live version's ending incorporates double bass drumming by Josh Freese and a guitar solo by Aaron North but is otherwise identical in arrangement to the other versions. 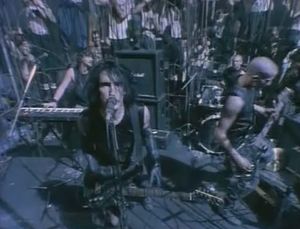 Screenshot from the "Wish" video

In 1992 the music video for "Wish" premiered. It was directed by Peter Christopherson, who also directed "March Of The Pigs" and the infamous Broken Movie. Oddly enough, "Wish" bears a strong resemblance to the video for "Rock You Like A Hurricane" by The Scorpions.

The video features the band (Reznor, Richard Patrick, James Woolley and Chris Vrenna) performing in a rather ornate cage. Outside of the cage is a mob that seems determined to get into the cage and attack the band. The finale of the video shows the mob accosting the band through the bars, grabbing at them and attempting to bind them. Ultimately, they break through the chain keeping the band locked inside and storm in, wielding baseball bats and other crude weapons. MTV felt that the ending scene was too violent and alternate footage was used for network airplay.

The video can also be found on the Broken Movie. The only major difference is that footage from the movie can be seen during the video's interlude.

A second video is a live video filmed by Simon Maxwell. The footage used for this (as well as the live videos for "Eraser" and "Hurt") was shot in Dallas, Texas and Omaha, Nebraska in February of 1995. The footage is different from that used in the Closure performance.

"Wish" has become a staple of the Nine Inch Nails live shows, performed at nearly every show, due to its high energy and guitar-oriented structure. The instrumental bridge is played by guitars rather than synthesizers in nearly every instance. When this song debuted on the Lollapalooza Tour in 1991, it was musically very similar to the final version, but with different lyrics.

"Wish" has been covered by a variety of artists. More information can be found here.

Prior to the release of Broken, the following extra lyrics were sung over what became the instrumental ending: