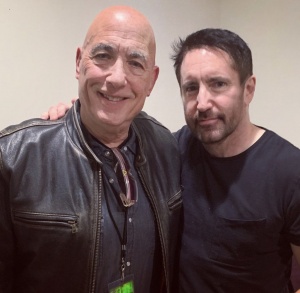 Garson and Reznor backstage in 2018.

Mike Garson (born Michael David Garson on 29 July, 1945) is an American pianist who has collaborated with David Bowie and Nine Inch Nails, among other well-known acts, throughout his career.

He has performed as a live guest several times with the band during the Wave Goodbye Tour in 2009 and the Cold And Black And Infinite Tour in 2018. He guested in the studio on "Ripe (With Decay)", "The Way Out Is Through" and "Just Like You Imagined" from 1999's The Fragile. He also appeared on "Just Like You" from the Gone Girl Soundtrack and co-wrote/performed "Trust In The Law" from Volume 02 of Watchmen (Music From The HBO Series).

In 2021 he accompanied Trent Reznor and Atticus Ross for covers of David Bowie's "Fantastic Voyage" and "Fashion" (with Mariqueen Maandig on "Fashion") for A Bowie Celebration: Just For One Day!, and made an appearance on the Halsey outtake "People Disappear Here", which was produced by Reznor and Ross during the sessions for If I Can't Have Love, I Want Power.[1]

In a 2014 interview with allmusic.com[2], Garson revealed that he recorded parts for fifteen tracks on The Fragile:

On the Fragile album I actually played on 15 tracks, I wish he’d release those sometime as instrumental, because the piano playing on the tracks he had me play on was phenomenal, but he only used three. I asked him why, and he said that they were, from his point, so Bowie-influenced, which means they were so Mike Garson in style, because I had the style before I played with Bowie, but he said it’s so connected with Bowie that it takes away from his individuality, so he thinks it’s a liability to him. I said that I respect his viewpoint, but I’m pissed off because I’d worked so hard, I went to New Orleans and did all these tracks and he loved them.