Throw It Away (podcast) 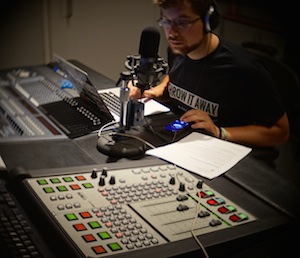 THROW IT AWAY in the studio

THROW IT AWAY is a Nine Inch Nails themed podcast which ran from 2014 to 2018. Episodes revolved around discussion of NIN news & events, as well as general NIN discussion. The title of the podcast is taken from the ending lyrics of "Gave Up" (from Broken Halo 5).

Conceived in March of 2014 by Alex Gertsma and Tito Danger Burns, http://throwitaway.net/ became active in May 2014 and was created by Danny Mantyla. The three have been friends since high school and have traveled far and wide to see NIN together over the years.

THROW IT AWAY’s first episode was released on Bastille Day, July 14, 2014, and subsequent episodes were released on a monthly basis. Alex is based out of Seattle, with Tito in the San Francisco area, and Danny joining in from Lawrence, Kansas. As of summer 2015, Johnny has joined the podcast to offer his audio technical expertise.

In addition to discussion between the three, guests who have demonstrated a love of NIN (and/or relevance in the NIN community) are invited onto the program. THROW IT AWAY also maintains a presence on social media (Facebook, Twitter, etc.) and on Echoing the Sound in order to maintain contact with the NINternet and NIN community.