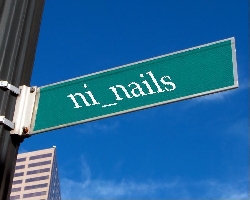 I've been listening to nin since I was a baby, but I never really discoverd them for myself until I was 13. My frirst album that I ever listend to was the infamous Pretty Hate Machine. Since then I've been hooked. I can hounestly say I have listend to every NIN halo more then once. I am slowly restalking my NIN cds, cause I ran ito a problem where the ones I owned where stole D: But still I'm a big fan of Nine Inch Nails, and odly enough I tend to remember NINfo better then my own birthday.

The albums I own are... Pretty Hate Machine, Broken, Fixed, The Downward Spiral(delux eddition), Closer To God, Further Down The Spiral(v.1), The Perfect Drug, The Fragile, Things Falling Apart, With Teeth, Ghosts I–IV.

I am 18 years old, I have remixed 3 NIN songs; Bite The Hand That Feeds, God Given (sadly it didn't load properly on to remix.nin.com, And one that I crafted using The ballgameover.mp3 from the Year Zero alternet reality game.

Some people say I'm obsest with Nine Inch Nails, others say I'm gay for Trent Reznor, but truthfully, without NIN I'd have nothing to talk about. -_-