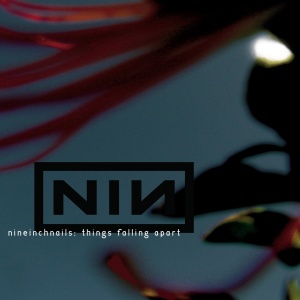 Things Falling Apart (also known as Halo 16) by Nine Inch Nails, released on November 21, 2000, is described as a collection of "various manipulations of songs recorded from The Fragile sessions." An official website was set up for its release. A two-track promotional version of Into The Void was released in the US and was incorrectly labeled as Halo 16. 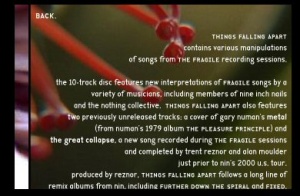 "The first album art I was ever tasked with making was for NIN's "Things Falling Apart." It was a companion album to "The Fragile," which David Carson did the art for. Carson was a design hero of mine, so of course playing in his style was exhilarating but also very intimidating for a very young, very new designer. A lot of Carson's imagery was accidental snapshots of every day things that he'd capture with disposable cameras and polaroids, and the out-of-focus nature of them turned simple things into abstract art (the red texture on the cover of The Fragile is an out-of-focus snapshot of the inside of a shell, for example). To start capturing some of my own for TFA, I experimented with a macro lens for the first time, and later bought one to make imagery with. It sounds like basic art school shit now because you can get a macro lens for your phone for like $30, but it was very expensive niche equipment back then. Through that lens, and taking what I'd learned from Carson, I started to see art and texture in everything I looked at. Needing new imagery for a project and just looking around wherever I am and finding tiny details in it has never steered me wrong ever since."