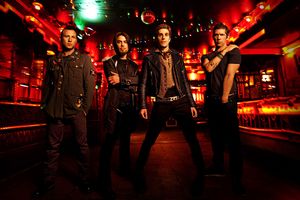 Jane's Addiction is an American alternative rock band formed in Los Angeles, California, in 1985. The band is currently composed of core members Perry Farrell (vocals), Dave Navarro (guitar), and Stephen Perkins (drums). For the majority of the band's career, its bassist has been Eric Avery. After breaking up for the first time in 1991, Jane's Addiction briefly reunited in 1997 and again in 2001; both times, Avery declined to participate, and the band has used several bassists in his place.

In 2009, the band's "classic" lineup, featuring Avery, reunited to co-headline with NIN for the NIN/JA portion of the Wave Goodbye Tour. That same year, Trent Reznor produced new recordings of two early Jane's Addiction songs ("Whores" and "Chip Away") for the NINJA 2009 Summer Tour EP. Two new songs ("Embrace The Darkness" and "I'll Protect You") were also recorded but never released. Eric Avery was recruited to play bass on NIN's 2013-2014 tour, but left the lineup before the tour started.