"Less Than" is the first track on the 2017 EP Add Violence. It was first made available through the official Nine Inch Nails YouTube channel on July 13, 2017. The lyrics of this song seem to reference the How To Destroy Angels album Welcome Oblivion, and/or its title track.

In 2020, a promotional CD from Capitol Records was put up for sale on eBay, containing multitracks for this song as well as "The Background World".

"Less Than" made its live debut at the first show of the I Can't Seem To Wake Up 2017 tour. It was a staple throughout that tour and Europe + Asia 2018, and continued to appear at most shows of the Cold And Black And Infinite Tour. 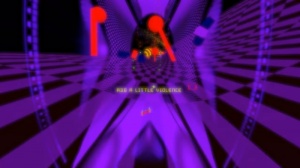 Screenshot from the "Less Than" video

On July 13, 2017 a music video directed by Brook Linder was posted on the official Nine Inch Nails YouTube channel. It features a woman playing a video game that incorporates lyrical lines from the song. The game being played is a customized version of Polybius, which was inspired by the subject of an urban gaming legend from the 1980s. The creator of the game was contacted by Trent Reznor and asked to create a special build for the video.

An additional line is included in the mp3 tag though not sung:

Further lyrics are printed on the physical component. The final line seems to reference "March Of The Pigs":