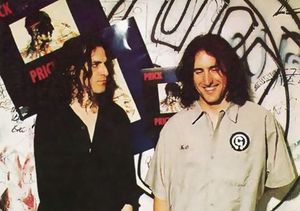 Prick is an industrial rock band formed in the early 1990's by Kevin McMahon. Prick was signed to Trent Reznor and John Malm's Nothing Records label. The band's debut self-titled album was released in 1995, with Reznor producing four of the album's ten tracks. McMahon was also briefly part of the Nine Inch Nails live lineup for the Nights Of Nothing Tour in 1996. McMahon's previous band, Lucky Pierre, featured Reznor on keyboards in its 1988 lineup.

Prick's lead single, "Animal," received high rotation on MuchMusic and MTV, and Prick opened the US leg of NIN and David Bowie's Dissonance tour. Nothing's parent label, Interscope Records, dropped Prick before McMahon could record a follow-up. In the wake of this set-back, McMahon went on another years-long hiatus from music. Prick reemerged in 2002 with The Wreckard, independently released by McMahon over the Internet, and featuring many songs once slated for the second, canceled Nothing Records album.