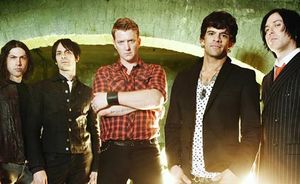 Queens Of The Stone Age is an American alternative rock band who has collaborated and toured with Trent Reznor and Nine Inch Nails on several occasions.

The band was formed in 1996 after the dissolution of frontman Josh Homme's previous band, Kyuss. Over the years, the band have had many collaborators such as Mark Lanegan, Natasha Shneider and Billy Gibbons.

QOTSA opened for NIN during the With Teeth Fall Arena Tour and co-headlined with NIN during the NIN 2013-2014 tour. Homme stated in an interview that Reznor recorded a song with him for use on the album Year Zero, but the song did not make it through to the final cut. Reznor appeared on "Era Vulgaris" from Era Vulgaris (download-only bonus track), and "Kalopsia" and "Fairweather Friends" from ...Like Clockwork.

Reznor and Homme also collaborated with Dave Grohl on a track called "Mantra" from the soundtrack to his documentary Sound City: Real To Reel. In 2014, NIN and QOTSA performed together alongside Grohl and Lindsey Buckingham for the 56th Annual GRAMMY Awards. Former QOTSA drummer Joey Castillo appeared with members of Nine Inch Nails in an episode of the 2017 reboot of Twin Peaks.