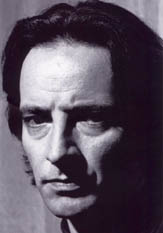 Russell Mills (born 1952) is a British painter, designer and ambient musician who created paintings that were used for several Nine Inch Nails releases. Other bands and artists he has worked for include Brian Eno, Cocteau Twins and David Sylvian.

In art school, Mills began creating artwork inspired by lyrics from Brian Eno songs, which were later used in the book More Dark Than Shark. Starting in the 1980s, he was receiving commissions to create artwork for album and book covers. His style began to evolve from traditional drawing and painting into a more abstract collage-oriented style, with many organic elements and items from nature being used as materials. His paintings are sometimes seen as visually mirroring the sometimes ambient sounds of some of the albums he designs covers for.

He has done many exhibitions over the years, created multimedia installations and also designed sets and lighting for performers such as London Contemporary Dance Theatre, Wire and Terry Riley. He has also made two albums of semi-ambient music (Pearl + Umbra and Strange Familiar) under the name Undark, by creating sonic collages from unused sounds given to him by musicians he has connections with. Additionally, he has made ambient music to accompany his various installations, sometimes working with frequent collaborators Ian Walton and Mike Fearon. This catalog of installation music is being released in a six-part series called Still Moves.

The cover art for Closer To God is frequently misattributed to Mills. It was actually done by photographer Joseph Cultice, though he is uncredited on the packaging.[1] 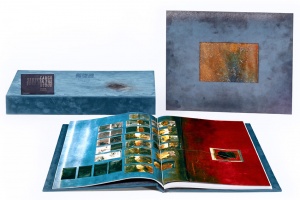 Nine Inch Nails and long-time collaborator and artist Russell Mills present Cargo In The Blood, a deluxe, limited edition 320-page book collecting all of the works the artist created for Nine Inch Nails’ Hesitation Marks album. Each volume also includes an original mixed media painting created by Russell Mills specifically for the project. Available exclusively on NIN.com, Cargo In The Blood is limited to 2000 copies and will be available to order 12/16/15 10am PT.

In an interview with Vice Magazine[2], Mills explained the relationship between Trent Reznor's and his second-hand experience with addiction and how that informed the art for Hesitation Marks/Cargo In The Blood:

How did your (and Trent Reznor’s) proximity to addiction influence Cargo In The Blood?

Greatly. The title gives it away. The works are generally about the conjoined themes of chaos and order, and control and surrender, relating to and reflecting on the traumas that both Trent and I have experienced in our lives, traumas that will inevitably continue to shape our lives.

Trent had battled with alcohol and drugs at first hand, had damaged himself and caused great distress to those around him; that’s the nature and pattern of an addiction. I’d lived with a chronic alcoholic wife for over four years, which meant being a psychological (and occasionally a physical) punching bag. While trying to be a carer I was also trying to protect my son—who was just eight when this vortex of pain and disruption exploded - from her worst excesses.

After over four years of trying to help my wife recover, unfortunately she still wasn’t prepared or wasn’t able to commit to rebuilding our lives or to stay dry. As I couldn't live with the prospect of years of more unpredictability and I had my son to think about, after weeks of painful conversations, we concluded that we’d have to divorce. Given her condition I was awarded custody of our son and while my focus was predominantly on his well being, I was also trying to make sense of what happened. A few years of shell shocked dumbness followed in which I was unable to create anything; I didn’t see any point. Nothing interested me; everything seemed trivial, irrelevant. I shut out the external world as my mind internalized, fixed on what had happened.

In our early conversations towards what became the Hesitation Marks album, Trent stated that he felt that the material he was working on was allowing him to find some kind of equilibrium in response to his years of alcohol and drug-driven anger, frustration, shame and pain. The tracks that were in process were in embryonic form, but he sensed their promise. He was feeling his way, suspecting, hoping that something new and positive and vital might emerge. I had reached a similar point.

As we discussed the Hesitation Marks project, we talked a great deal about our respective traumatic “black” years, and discovered disturbing similarities in numerous aspects of our experiences, both during and post-crises, that came into alignment. We had both reached a point at which we had understood the whys and wherefores of addiction and the appalling fallout that follows. We had both come to accept certain truths, some unpalatable, and while we were both still angry and confused, we had found coping mechanisms that were allowing us to function with renewed focus and purpose. We were both attempting to harness the energy of the massed conjoined complicated emotions were still churning in us both.

Hesitation Marks was a cathartic route out of that mire for both of us. For me, the call from Trent to say that the project was proceeding, that a new NIN album was going to happen, was the green light that I needed to really let all this emotion out. The project gave me a license to explore all the ideas about chaos and order and control and surrender that had been buzzing in my head for years. The result is the Cargo In The Blood collection, a project of reclamation and regeneration.