Closure was originally intended to also have a release on LaserDisc, and pre-orders were taken by Trimark, but the release was canceled.[1] In 2021, a fake LaserDisc of Closure was put up for sale on the nin.com store as a joke. According to Russell Mills, who created the artwork, a live album was also planned as a companion to Closure and artwork was made for it, but the idea was scrapped.[2] The unused paintings can be seen here. 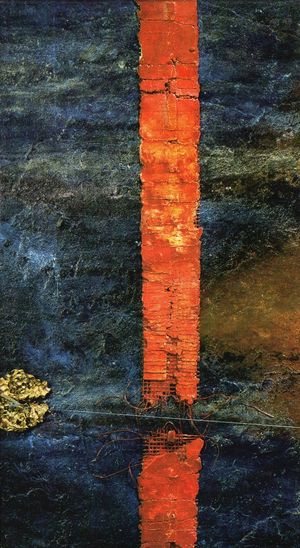 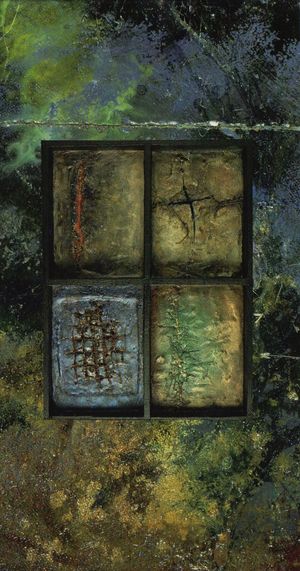 An improved DVD version was announced via QuickTime trailer on nin.com, to be released in late 2004, but due to lack of interest by Interscope Records, it did not happen. On December 20, 2006, two DVDs of Closure were posted on The Pirate Bay's BitTorrent tracker. Shortly after the leak, a message on Trent Reznor's personal blog on The Spiral was posted linking Reznor himself to the leak:

Rob Sheridan has since confirmed that the leak was from the NIN camp.[3] The download is intended to be burned onto dual-layer discs. A three-disc, single-layer version was promised for later, but never materialized. The prototype is currently available on archive.org.[4] Closure: Part 1 and all of the bonus material from both parts of the DVD version have been uploaded to the official Nine Inch Nails Vimeo account. As was the case with the And All That Could Have Been DVD, the menus are accompanied by several different dark ambient music pieces recorded specifically for them.

Several years before this higher quality DVD was leaked, a commercial bootleg DVD version of the original VHS titled Rated 'R' - A Retrospective was released. Aside from the main menus, it is virtually identical to Closure.

The original live document of NIN's Self Destruct Touring Cycle (more specifically, the Further Down The Spiral Tour) was helmed by Simon Maxwell, director of the videos for "Hurt", "Eraser" and the live video for "Wish". The footage was eventually rejected and footage that had been shot concurrently by Jonathan Rach and Jeff Richter was compiled instead. Maxwell expounded on this in an interview [5]:

So to clarify, you were cutting songs from the tour, not from that studio shoot in New York you did [for "Hurt"]?

So he said "no" to that stuff you’d shot with a million cameras.

So from there, you all decided to cut it back and make it much simpler, and we have the "Hurt" video we know today?

Well that was done earlier. That was done about six or eight months earlier. Then Trent wanted a documentary-style thing of the tour. So we shot loads for footage of the tour. We had 35mm cameras on the main performance, and then Super 8s on the audience. There was reams and reams of footage. And from what I remember, someone stole all the Super 8 footage! It just disappeared. It was shot all over the country in the States, then it was shipped to LA and then it was shipped back to England. When we came to put it all together, a lot of the Super 8 footage had disappeared. I knew we had it – I had seen the rolls of film – but when we came to put it together – you know, we had these rolls sitting next to the telecine machine - I am going, "Where the fuck is all the Super 8?" Because that was the idea, capturing the essence of the whole gig on Super 8, and intercutting it with the high production, 35mm stuff. But – it disappeared!

The original 1995 footage finally surfaced on YouTube on April 6, 2022. It had been preserved via a personal VHS copy made by someone who worked at the London editing studio where Simon Maxwell assembled his rough cut of the footage, before sending it to Nothing Records for approval (at which point it was scrapped). It was shot in Dallas, TX and Omaha, NE in February and was the same source footage used for the aforementioned "Hurt", "Eraser" and "Wish" videos.