"Came Back Haunted" is the third track on the 2013 release Hesitation Marks, and is the first single from that album. Trent Reznor stated in an interview that the song uses one of the same synths that was used on Pretty Hate Machine.[1]

This is the original album version. It begins uniquely with a lone, quiet vocal singing "hau-hau-haunted" as in the chorus. The song then opens proper with the main drum loop, soon joined by a bizarre bassline to begin the first verse. Noise and guitar layers enter for the choruses, while percussion layers augment each verse.

Available as part of a digital promo, though only a 30 second sample has surfaced so far. Also included on an internal Columbia Records promo released under the name "Taxi Driver".[2]

This song debuted live on the first night of the NIN 2013 Festival Tour, and was played at most shows in 2013 and 2014. During the Tension 2013 Tour, this song featured backing vocals by Lisa Fischer and Sharlotte Gibson.

"Came Back Haunted" was a rarity for the 2017-2018 touring cycle, appearing just three times. 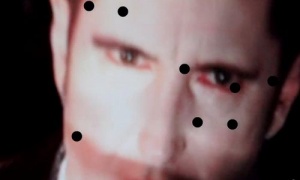 Screenshot from the "Came Back Haunted" video

The "Came Back Haunted" music video was directed by David Lynch and was released on June 28, 2013. It uses a shortened version of the song that is exclusive to the video.

The video has been flagged as potentially seizure-inducing for viewers with photosensitive epilepsy, due to its use of strobe effects. It features herky-jerky shots of Trent Reznor, wearing pancake makeup and lipstick, interspersed with other bizarre images. These typically Lynchian visuals include an image of a tick overlaid onto an image of a young ballerina, a seemingly disembodied and vaguely humanoid face reminiscent of something out of Lynch's Eraserhead, a trio of glowing zoomed-in images of mouths sitting atop little dancing bodies, and an expanding cloud of dark gray smoke in the corner of a dark room.

The fully-produced video was preceded by an audio video that was released by Vevo on June 6, 2013. It features a reel-to-reel tape deck playing the song, filmed from multiple angles. It was listed as "Came Back Haunted (Audio)". It was made for the purpose of providing internet video outlets with an official source of the audio.