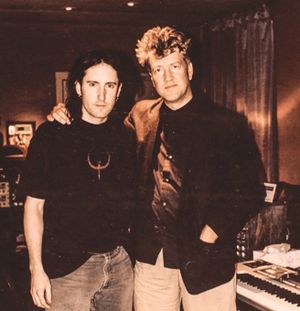 David Keith Lynch (born January 20, 1946) is an influential American filmmaker, artist and musician who has worked with Trent Reznor and Nine Inch Nails. He is most well-known for films such as Eraserhead, Blue Velvet, Mulholland Drive and for the television series Twin Peaks.

Lynch was born in Montana and grew up all around the United States as his father, a research scientist for the U.S. Department of Agriculture, needed to relocate frequently. His idyllic upbringing and fascination with small-town America would inform much of his work. He became interested in art at an young age and has continued to draw and paint alongside his career in cinema. His work is characterized by its surrealist and disorienting style and sometimes violent and disturbing imagery. His films often carry recurring themes and devices, and their sound design is frequently tantamount to their visuals.

He began making films as a student at the Pennsylvania Academy of Fine Arts and his first major film, Eraserhead, gained him a cult following in the late seventies, but his breakthrough wouldn't come until 1986 with Blue Velvet. He later helmed the TV series Twin Peaks with Mark Frost, which brought him to a much more mainstream audience and also proved highly influential on many other television shows in its wake. The popularity of his films after this point began to decline, but he had a return to form with Mulholland Drive in 2001. A continuation of Twin Peaks under the title Twin Peaks: The Return was brought back to TV in 2017. Lynch has also recorded two albums, Crazy Clown Time and The Big Dream, as well as several collaborative albums, and is an accomplished photographer.