In order to make up for canceled shows from 2020 and 2021, Nine Inch Nails embarked on a new tour. Apart from the Wave Goodbye Tour in 2009, this was the only other tour without a new album to support. Opening acts include Nitzer Ebb, Yves Tumor, Boy Harsher, and 100 gecs. 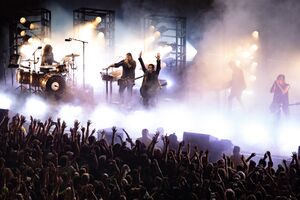 The setup was largely similar to that of the Cold And Black And Infinite Tour. An additional leg of that tour was originally planned for 2020, and the production was now able to be brought back. The onstage PAR can lighting from the 2018 tour was altered to include rack-like structures around each set of lights.