"She's Gone Away" is the third track on the 2016 EP Not The Actual Events. The song features Mariqueen Maandig as a guest vocalist.

In a Q+A session before the 2017 Riot Fest show, it was revealed that "She's Gone Away" was written specifically for Twin Peaks: The Return. It was later revealed that an early version of "This Isn't The Place" was originally presented to David Lynch who rejected it, asking for something edgier.[1] Nine Inch Nails (billed as "The Nine Inch Nails" and consisting of Trent Reznor, Robin Finck, Mariqueen Maandig, Atticus Ross, Alessandro Cortini and Joey Castillo of Queens Of The Stone Age) appeared in an episode doing a mimed performance of the song, which also appears on the soundtrack for the new series.

"She's Gone Away" made its live debut, and so far only performance, at the surprise Webster Hall show of the I Can't Seem To Wake Up 2017 tour. 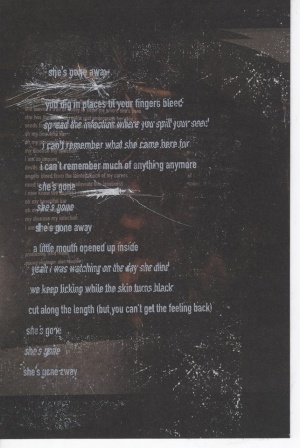 In the physical component for Not The Actual Events, the song lyrics are superimposed over a copy of page 14 from the Deluxe Edition booklet of The Downward Spiral.

"She's Gone Away" on Twin Peaks